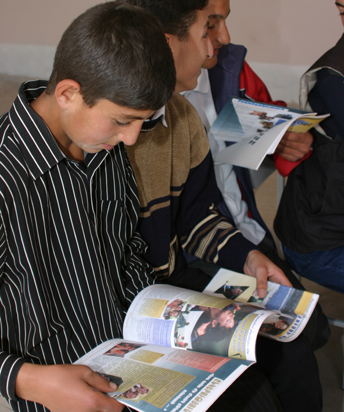 Armen said. “It is impossible that I am totally useless.” No one appeared in his……

Armen said. “It is impossible that I am totally useless.”

No one appeared in his life to cherish him, though, and Armen gradually lost hope.  “I decided that if my life is useless and no one needs me, it means there is no sense in living.  I decided to end my life. ”

On the same night that Armen made this heart-wrenching decision, he had a dream — people he had never seen before were telling him to wait … they were coming … he should not kill himself.

The next day, a OneHope team from the local church came to the orphanage with The GodMan film and the Book of Hope for the children!

Armen was amazed — these were the people from his dream!  He listened carefully to all they had to say, watched the film, and chose to dedicate his life to Christ.

“Today, I understand that I am not alone, and I am not useless,” Armen said. “I have a Father and a

Lord who loves me so much. Now there is a sense in my life, and I will live it with Jesus!”