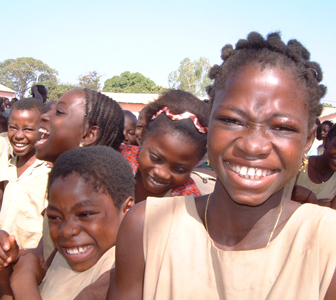 She felt torn in two.

Her mother followed a demonic tribal religion — taking her and her siblings to scary rituals and animal sacrifices.

Her father followed Islam — taking her to the mosque, even though she didn’t understand any of the prayers or speaking.

Sometimes when she went to the spiritist rituals with her mother, her father slapped her around for defying Islam.

“I was completely bewildered and didn’t know what to do,” Katin recalls. She was only nine years old, and faced with this choice: “Who should I really follow to have peace in my life?”

Then the answer came to her — in the form of a film about Jesus. Katin and her friends saw The GodMan film, and began to understand who Jesus is, and what His life and death mean to us.

Katin chose to follow Jesus, went home and told her siblings and parents about the new life she had discovered. Today, the entire family is walking with Jesus Christ, and attending their local church together!

Thank you so much for being a part of reaching young people like Katin! Your prayers and support today will make an incredible difference in the lives of children and youth. Every dollar reaches three with the Gospel.