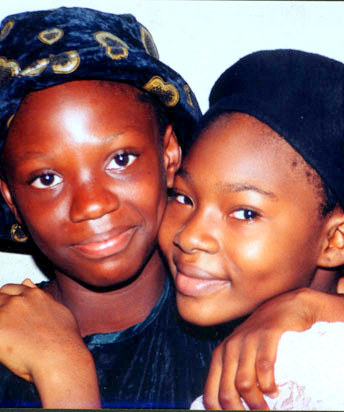 Peace and her best friend Nantap were anxious to make some money over their school holidays.  Although just nine years old, they knew how to prepare and cook a local snack which they can sell. The problem was getting the leaves they needed to grind into the “kwado” cakes. They had no money to buy them.  So they stole them.  Each of them shoplifted one carton at a local marketplace.

Then they went to a showing of The GodMan film.

The film shows the story of Jesus’ life through the eyes of a small boy named Caleb, who, in the beginning of the film has stolen from an old man — and by the end of the film, repents and returns what he has stolen. The fictional character is shown after his repentance, joyfully embraced by the Savior.

When Peace saw the film, she knew she had done wrong, just as Caleb had done. “When I remembered how the boy in the film stole from the old man, I was scared of everything,” Peace says. “I really wanted Jesus to hug me.”

Although they were scared, Peace and Nantap took their stolen cartons of leaves back to the grocer, returned them, and apologized for stealing. He gave them an angry talking-to! But they had chosen to follow Christ as Savior, and He gave them courage.

“I know Jesus has forgiven me, and I know He will hug me now, because I’ve repented all my sins, and so has my friend Nantap,” Peace says.

Télécharger Nigeria Findings at a Glance